India’s Bhavina Patel scripted history at the Tokyo Paralympics when she became the first Indian to win a medal at the prestigious quadrennial Games. Bhavina Patel lost to World No. 1 Zhou Ying of China in the final 7-11, 5-11, 6-11 to end with a silver medal.

Although Bhavina Patel lost the gold medal, the stellar campaign the paddler had at her debut Paralympics was laden with a lot of emotions and learnings.

Bhavina Patel stormed into the final, beating higher-ranked opponents on the way to become India’s first medalist in table tennis. The medal was then India’s fifth silver medal at the Paralympic Games.

In an exclusive interview with Sportskeeda, Bhavina Patel said her first Paralympics medal had a lot of emotions attached to it. She said:

“It is an amazing feeling to be winning a medal at that stage. This was my debut Games and I have got a lot of experience and have realized my goals through this medal. There are a lot of emotions attached to this medal.”

In a way Bhavina Patel became a lucky charm for India after becoming the first paddler to win a table tennis medal. India went on to have a successful campaign, returning with a best-ever performance of 19 medals, including five gold, eight silver and six bronze.

“This is the first TT medal and after the feat most of them told me that we (India) will get lucky in the Games after this start. It is overwhelming to see that we, as a nation, have won so many medals in the Games. It has been a great experience for the entire Indian contingent at the Paralympics.”

Such a superlative performance wouldn’t have been possible without support from multiple corners. Bhavina Patel thanked the Sports Authority of India (SAI) for providing advanced training equipment like a table tennis robot, table tennis wheelchair and a TT table. They also provided financial assistance towards physiotherapy, dietician, psychologist and coaching fees leading up to the Games. Bhavina Patel explained:

“There are lot of institutions and people on this journey who have supported me a lot. I must thank the Paralympic Committee of India, SAI, Olympic Gold Quest (OGQ), my sport’s federation etc, who supported me a lot. SAI, through the TOPS (Target Olympic Podium scheme) gave me an advanced robot with which I could practice a variety of shots thereby improving my game.”

“OGQ provided some training equipment TT balls, extra wheels etc. Only because there was an unconditional support from all quarters, I was able to focus on the game properly at the Paralympics”.

Bhavina Patel takes the loss in the final in her stride

Although Bhavina Patel was completely outplayed in the final, the paddler said there is a lot to learn from the World No. 1. She explained:

“She is a five-time gold medalist at the Paralympics and her disability was less than mine. Her movements were very good and her ball control was good. We have to learn a lot from them, the way they play the game, the strategies they use etc. The spin was very difficult to control on the table. They have been playing on the same tables for a long time and it has helped. These are my learning points. I now know what to prepare for the future.” “

Also Read: Rejected for a job due to her disability, para-paddler Bhavina Patel has etched her name in Paralympics history 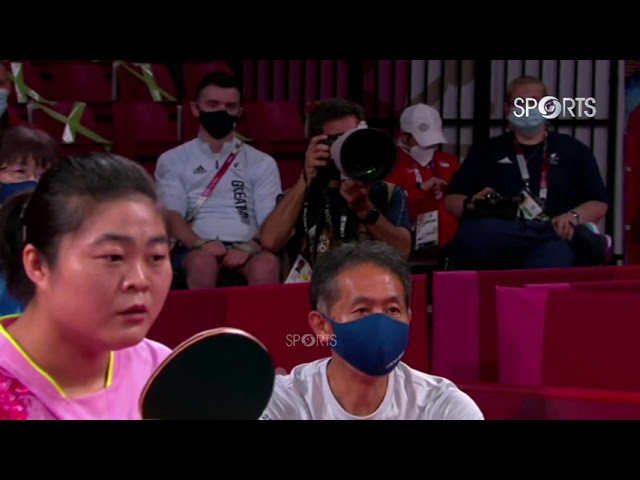 One of the stand-out moments of Bhavina Patel’s campaign were the time-outs she used at crucial junctures to get their thoughts back and process her game plan.

It worked like a charm on most occasions as Bhavina Patel came back from being down in the dumps to emerge victorious. Speaking about the time-out she had taken in the semi-final, Bhavina Patel said:

“I saved the time-out for that moment, when I needed a turning point. I played a lot of deciders against her and I wanted to prove a point and come back into the game. She was leading 8-9 and that was when I wanted to take that break. I was hurrying up and I wanted to come back to play as per my strategy and break the momentum. I gathered my thoughts and came back with a better plan and implemented well, like how to play and how to space my shots and play.”