Catherine Paiz claims she doesn’t know who Trisha Paytas and Tana Mongeau are, after they accuse husband Austin McBroom of cheating The ACE Family has become YouTube’s favorite hot topic since Austin McBroom faced several lawsuits along with his wife Catherine McBroom. The two are now living in denial of the many scandals they are embroiled in. Since the YouTube megastars rose to fame, the family’s patriarch Austin, has been called out for cheating on his wife.

Austin McBroom is now being sued by music streaming platform LiveXLive for $100 million along with receiving lawsuits from TikToker Taylor Holder and musician Nate Wyatt, and his wife is being targeted as well.

Hollywood Digest followed Catherine McBroom in Los Angeles on September 2 and questioned her regarding the cheating rumors. They asked the 31-year-old mother of three:

“Tana and Trisha are always coming up with cheating rumors against Austin, do you have anything to say about that?”

“I’m sorry, I don’t know who those people are. Have a good day.” 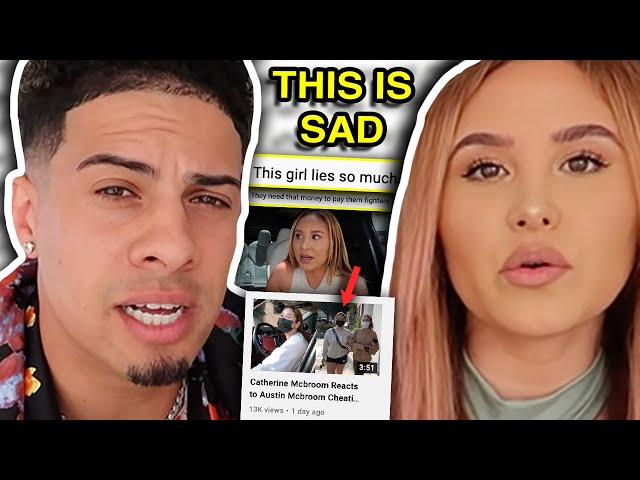 Catherine McBroom blatantly deflected the allegations against Austin McBroom. Fellow YouTuber Tana Mongeau has gone online claiming that Catherine once confronted her in regards to her husband cheating on her.

Catherine’s latest statement does not hold any accuracy as the former model was spotted alongside Austin McBroom at Tana Mongeau’s fake wedding to Jake Paul. Catherine and Tana were also rumored to have spent a lot of time together when the latter was dating Paul.

Trisha Paytas also attacked Austin McBroom in their Enemies podcast. They had said:

“You know, honestly? My thought is this, he’s clearly cheating. If there’s fifteen stories that are very similar that have some sort of receipts, chances are, you know, it walks like a duck, talks like a duck. It’s a duck. You know it’s a duck. So it’s clear that he’s cheating, right?”

This is not the first time Catherine McBroom has denied cheating rumors. In a Snapchat video, she had said:

“Every time there’s a big milestone, or a big event or something, or a lot of attention directed towards us, a lot of people start directing the attention to themselves. I think that is 100 percent stressful because it gives me anxiety, and what can I say? It makes me nervous. I stay off my phone, and I stay off social media.”

Many fans feel sympathetic towards Catherine as she appears to be trapped in the ACE Family kingdom with husband Austin McBroom allegedly cheating on her. Although the cheating allegations continue to pour in, the couple deny them as they have acquired success by being a family-friendly channel.