EXCLUSIVE: Lisa Rinna is back as Agent Billie Reed in Peacock‘s Days of Our Lives limited series Beyond Salem, and there’s a slew of new and returning characters she’ll be interacting with—some more closely than others. 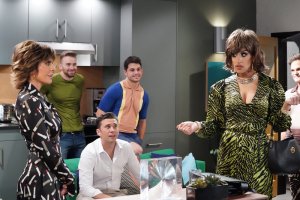 Monday’s premiere sets up Billie’s role as an ISA agent searching for six precious jewels that formed a priceless artifact known as the Alamanian Peacock. After they were stolen 30 years ago, the gems are suddenly resurfacing all over the globe.

“It’s a little bit like the Maltese Falcon except that we’re looking for the Alamanian Peacock,” Rinna said of the mystery weaving through Beyond Salem. “There’s a lot of wink-wink in this with bringing back past characters. I mean, it’s the funniest thing that Billie is working for the ISA. There’s a lot of tongue and cheek and I think the audience is in for a great ride.”

And Billie won’t be going on this treasure hunt solo. Agent Kyle Graham (Peter Porte) debuts in episode 2 and Deadline has an exclusive clip of the pair’s introduction below.

“Peter is such a great actor and we had a lot of fun together,” she shared. “I haven’t really worked like that as an actor in a long time and have someone to work off of in that way. And he’s hot!”

But is Beyond Salem setting up a potential love connection between the agents?

“Well, gosh. You know, I think there could be,” she revealed coyly.

RuPaul’s Drag Race Queen Jackie Cox will also come face-to-face with both Billie and Kyle, in a role that’s not new to her at all.

“When I read the script, I laughed out loud! I didn’t know they were going to put that in there,” Rinna said of Billie’s introduction to Cox’s character. “I love Jackie and I think she’s amazing. She’s done an amazing job every time she’s played me as a character. It was very meta on meta to have Jackie come in as Lisa Rinna to play Billie Reed.”

Billie will bump into other returning castmates who are in different parts of the world and also involved in the great caper, including her brother Austin (Austin Peck).

“A lot of them are in different cities and I cross paths with just about everybody at some point or another,” Rinna said. “Billie’s investigation goes to various parts of the world and certain people are in those parts so you can put it together.” 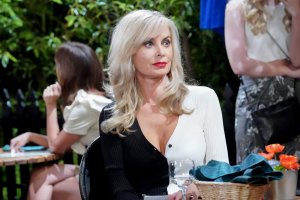 One detail Rinna wasn’t willing to divulge many details about is her reunion with Eileen Davidson.

“What I can say is that it’s way more amazing than anyone could ever imagine or hope for. It will blow your mind,” she teased.

Davidson was also tight-lipped about the storyline that will bring the two divas back together but promised that when she and Rinna share the screen, it’s effortless.

“Lisa and I have great chemistry in real life and on-screen. We didn’t really have time to rehearse but we just did it,” Davidson shared. “Thank God we have the underlying chemistry because I think it really pays off. It was so much fun.”

So what kind of trouble can fans expect from Kristen DeMera this time around?

“Oh, you know, she really hasn’t changed,” she said of the character she departed from playing in 2017. “She has not mellowed and she’s as devious as ever. It’s so interesting to me because Stacy Haiduk is playing the role of Kristen on Days of Our Lives. So this is an opportunity for me to visit these characters I helped create and still not rock the boat over there.”

She added, “Her portrayal of Kristen is different than the way I play her, and neither one is better than the other, they’re just different. So I think it’s fun people get to experience Kristen like she was in the ’90s or 2013 in a smaller platform. I hope the viewers have as much fun with it as I did.”

With Beyond Salem only consisting of 5 episodes and both women having had such fun reprising the roles they created, would they come back for more if Peacock orders another season?

“Absolutely! I had so much fun,” Davidson exclaimed. “I found interesting this different way of expressing soap opera to people and I think anyone who can do something unique with the medium—my hats off. Just when you think everything has been done you realize there’s a whole other world out there yet to be explored on daytime TV.”

Rinna was a little coyer.

“It was so much fun to do so never say never,” she said.