“Don’t think Misbah resigned on his own, he has been pressurized to quit” – Saeed Ajmal makes big claim amid raging controversy in Pakistan cricket Former Pakistan spinner Saeed Ajmal has claimed that Misbah-ul-Haq has been forced to quit his post as head coach of the national team. According to Ajmal, he knows Misbah very well and the former captain would not take such an abrupt step.

In a shocking development, Misbah-ul-Haq and Waqar Younis stepped down from their respective positions as head coach and bowling coach of the Pakistan team on Monday. Misbah cited spending “considerable time away from my family in a bio-secure environment” because of COVID-19-related restrictions as the reason for his decision. Waqar, on the other hand, said that since he and Misbah had started out together, it made sense for them to step away together.

According to Ajmal, though, there is more to the sudden resignations of Misbah and Waqar than meets the eye. Speaking on his YouTube channel, he raised questions over the timing of the exits and said:

“It was rather intriguing that Pakistan’s two coaches resigned on the same day that the squad for T20 World Cup was announced. What exactly transpired that forced Misbah-ul-Haq and Waqar Younis to quit, we will only know in the coming days. But what has happened in not good. Everyone is making fun of Pakistan cricket.” 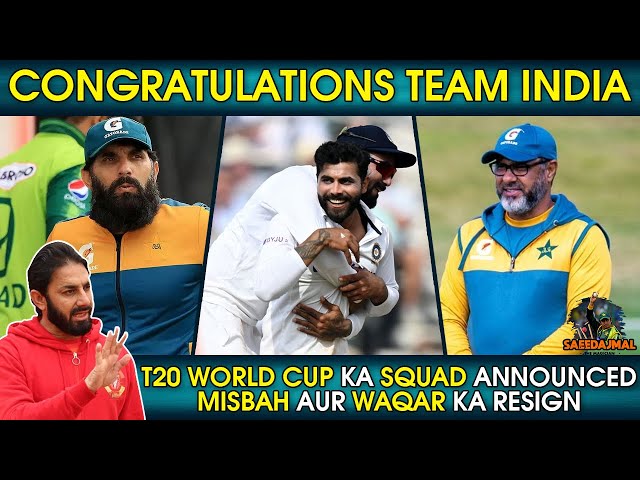 The former cricketer further claimed that Misbah is not someone who would step aside just like that. Ajmal added:

“The PCB has a three-year agreement with the coaches. Have they resigned on their own will or have they been forced to step down? Misbah has said he wants to spend some time with family. What is behind this? I am with Misbah, he is a very good friend of mine and I have played a lot of cricket with him. I don’t think Misbah resigned on his own, he has been pressurized to quit. Something is definitely amiss.”

The timing of Misbah and Waqar’s exits is intriguing considering former Pakistan captain Ramiz Raja has been named as the new PCB chairman.

Releasing a statement to confirm his decision of stepping down as Pakistan’s head coach, Misbah said that he has spent considerable time away from his family and has constantly been living in bio-bubbles.

“The quarantine in Jamaica post the West Indies series provided me with an opportunity to reflect on the past 24 months as well as the schedule for international cricket ahead. Considering that I would have had to continue to spend considerable time away from my family and that too in a bio-secure environment, I have decided to step down from the role.”

“I understand that the timing may not be ideal, but I don’t think I am in the right frame of mind for the upcoming challenges and it makes sense for someone fresh to step in and take the side forward.”

Meanwhile, the PCB has appointed Saqlain Mushtaq and Abdul Razzaq as interim coaches for the white-ball series against New Zealand later in the month.