Three cars are available for a test ride in the LS Car Meet’s test track. The first car is the new Übermacht Cypher, with the second one being the Vapid Dominator GTT. The final option is the most useful for players, as it includes the unreleased Karin Previon. Players can take it for a test drive to get a general feel of its mobility.

The coupe wasn’t available to GTA Online players until recently. Hence, this is a great opportunity to drive a last tuner vehicle from the Los Santos Tuners update. Gamers can’t buy the Karin Previon yet; all they can do is give it a test drive on the LS Car Meet’s test track. 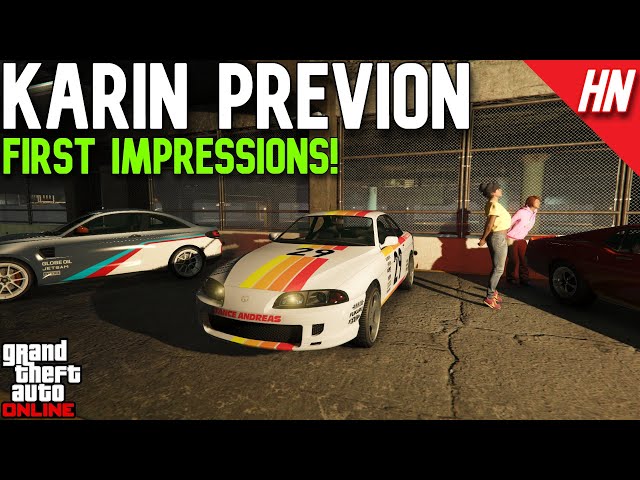 The Karin Previon seems to be a rear-wheel-drive coupe that possesses minimal understeer. It can drift well like other tuners introduced in the Los Santos Tuners update, though it is relatively slow to accelerate at first.

If GTA Online players like how the car feels, they should wait until next week as it will become available for purchase. It isn’t yet known what its top speed is, although it appears to be one of the fastest tuners upon first impressions.

The Karin Previon debuted in GTA San Andreas and was scheduled to appear in GTA 4 before getting cut. It is now making its triumphant return to the series in GTA Online, as the last tuner from the Los Santos Tuners update.

This tuner will be available for $1,490,000 (or $1,117,500 at Trade Price) when it officially launches next week. That would make it the fourth cheapest tuner in GTA Online, so its stats will likely reflect that. Of course, its price can change between the old leaks and its official release.

As it is the last tuner in GTA Online, the test track will become helpful only for new players who don’t know which tuner to purchase. GTA Online can always introduce more tuners in the future. However, that’s it from the initial batch from the Los Santos Tuners update.