One of the most difficult things to do in Pokemon GO is holding down a Gym without Pokemon with strong bulk.

Especially in highly populated areas, holding on to a gym can be frustrating due to all the challengers trying to take it out. If trainers want to maximize their rewards, though, they want to be holding onto gyms for eight hours. If this happens, that trainer will receive 50 Poke Coins.

To create a viable gym defense, trainers are going to want to look for Pokemon with three things: high Defense, high Stamina, and a typing with a low amount of weaknesses.

Which five Pokemon can bolster any gym defense team?

233 Stamina may be low when compared to other staples of gym defense teams. The Poison and Dark Combo that Alolan Muk possesses only has one weakness: Ground. Alolan Muk can hit back somewhat hard with its 190 Attack as well.

Swampert is another Pokemon with only one weakness in Grass. This is more appropriate for a gym defense team due to what opponents will likely bring to the raid.

Beating a gym requires multiple hard-hitting Pokemon, and only a few of those are Grass-types. It’s a lot more likely for a trainer to bring an Excadrill or a Landorus to nuke Pokemon in a gym fight than it would be for them to bring a Tangrowth. 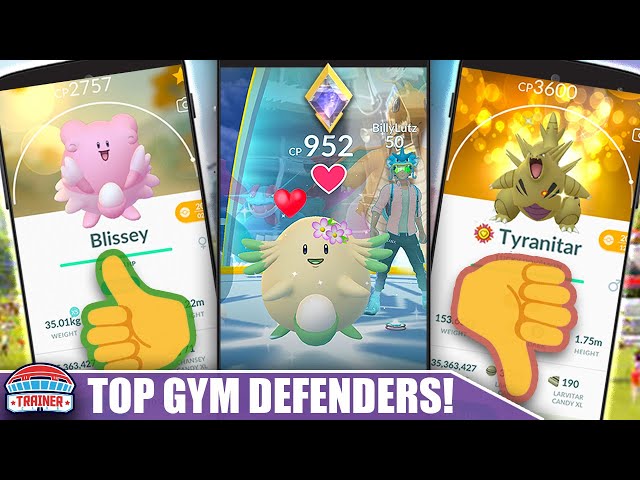 While it is certainly outclassed by its evolution, there is no downside to defending a gym with Chansey on a team. Even unevolved, this Pokemon has 487 Stamina. That’s more than enough health to outlast the strongest of attackers.

There is a small benefit to adding Chansey over Blissey as well. Chansey suffers less from CP decay. When a Pokemon defends a gym, their CP lowers over time. Since Chansey will often have a lower CP than Blissey, they won’t decay at as steep of a rate.

While gym defense is mostly about defending, some Pokemon perform well by dealing damage themselves. Metagross is a perfect example of this.

It’s unlikely that any challenger will bring Pokemon that want to take either a Psychic or a Meteor Mash. That being said, 228 Defense isn’t too shabby either, albeit on a Pokemon that’s more known for its offense.

This is the poster child for defense. Whether it’s in the main series, competitive play, or Pokemon GO, Blissey just laughs off any damage that’s attempted to be done to it.

It only has one type weakness in Fighting, but Blissey also gets access to Zen Headbutt, Dazzling Gleam and Psychic (all of which hit Fighting-types for super effective). There is just about one way to ensure beating a Blissey: bring Lucario.

Note: The article reflects the views of the writer.